The Battleground is a PvP region where players can claim and fight for control of different territories within it. A territory is claimed by a player planting its own, distinguishable flag, which must be made of a 2x2 woolen image. Please read the gameplay section if you're interested in joining. 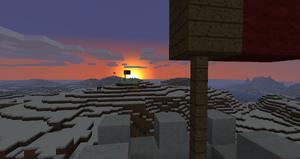 First, you must choose to join an existing team or to start your own. Each team has its own flag, so if you started your own team, you must choose how your flag looks. The flag is composed of a 2x2 grid of wool blocks, and each of those can have any color you want, as long as it isn't the same as the flag of an existing team. You should also choose a name for the team and officially register the team on the Blacraft subforum for The Battleground.

When you're on a team, there are three ways to join: 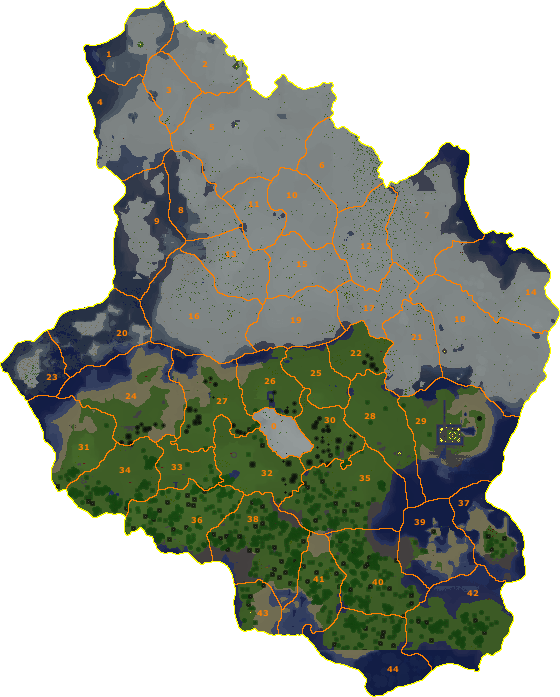 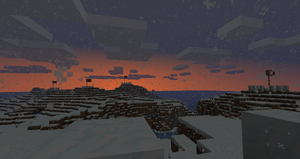 After a team has a zone within The Battleground, it can choose to expand into unclaimed territory/zones, or to declare war on any zone owned by another team which is adjacent to a zone owned by the team itself. The two teams must arrange a battle within 7 days. During that time, the teams may prepare the two battling zones. Both teams should have beds in their zones, so that they will spawn inside their zones if they die. No spawnpoint may be less than 20 blocks from the flagpole, and not higher than the bottom block of the flagpole. When the battle begins, the objective for the attackers is to replace the flag of the defending team with their own flag. If they manage to do that within 20 minutes, they will gain control of the zone. The objective of the defending team is to prevent the attackers from doing it, and if the attackers fail to replace the flag within 20 minutes, the borders remain unchanged. The entire wool part of the flag must be destroyed before the attackers can place their own flag. If only a part of the flag is destroyed, the defending team can repair the flag. The defending team can also destroy flag blocks placed by the enemy, as long as the enemy hasn't placed all of the four flag blocks.

Every team should have a zone designated as base. On The Battleground map, the base zone of a team is the one which has the team flag on it. By default it is the first zone that a team has claimed. It has speial properties:

Relocating the Base Zone[edit | edit source]

A team can choose to relocate the base zone to an adjacent zone controlled by the team. The process takes a week.

To make battles more equal/skill based and less expensive, certain items are banned:

On June 21, the Red Front was founded by Blanoxium with the goal of annexing The Battleground as another Communist region, so that its resources could be extracted for the good of the Blacraft State. Blanoxium built several small snow bases as he entered from Plaxium Front in Epicland, and he planted the red flag of the Red Front in four of them, expanding about 30% into the region from northeast.

On June 22, _Darvince joined the Red Front, which expanded further, especially south. Ventus and atomic7732 also founded a team, which did not have a name or flag yet, however.

On June 24, Quontex formed The Molten Front, while Blanoxium continued to claim more land for the Red Front.

On June 25, the Red Front continued to expand, and had claimed the whole eastern half of the region.

After a long break, the Red Front expands further northwest and southwest, beyond the central river. Mudkipz joins the Red Front on the same day.

On August 21, Darvince switched from the Red Front to the Sequoia Front. The Lenin Front formed on August 21 from the previous zone controlled by the Ahere Front. It expanded south, claiming zone 37 and 39 On August 22, The Blue Front formed as well and claimed three zones near the starting zone.

On September 5, 2013, Darvince claimed zone 41, and all 44 zones of the Battleground were now claimed. War became the only way to expand.

In late September, The Sequoia Front abandoned its zones, following the assault on Zone 36. Their assault base was seized by the Red Front, and their two other zones later claimed by The Blue Front.

March 29 became a historically violent day. First The Blue Front launched an attack on The Lenin Front's Zone 39. The Lenin Front succeeded in warding off the attackers in the notable ice castle. The Lenin Front launched an attack on The Blue Front's base, Zone 35. The notable defensive design of The Blue Front - submerging the entire surface of the zone in a layer of water - had proved to be very effective in the assault on Zone 30. In this new battle, The Lenin Front had brought lava to counter the defenses. They began by pouring lava near the border of Zone 28, creating a belt of fire between them and the defenders, that solidified into cobblestone, and allowed the attackers to move deeper and deeper into the zone. It did not take long before they reached the ground below the base, and Fiahstorm managed to sneak up on the flag of the defenders, replacing their flag with the flag of The Lenin Front. Thus the The Blue Front was conquered.
However, the base of The Lenin Front still lay vulnerable at the border of The Red Front, in Zone 29. The Red Front seized this opportunity to launch an attack on this zone. The large open fields created an anarchy of ranged and melee combat, but as time progressed, the Red Front established some small cover holes in the fields and began to assault the classic castle design with many traps. The flag of The Lenin Front was burned down and replaced at least 5 times during the battle, before the Red Front finally managed to put up its flag, with Mudkipz putting up the first three blocks before Blanoxium jumped up, placing the final block and sealing the victory. The Red Front had thus, in one quick attack, seized control of the entire Battleground region.
The Red Front decided to give back the zones of The Lenin Front, except for the conquered castle, to The Blue Front.

Retrieved from "https://blacraft.fandom.com/wiki/Blacraft/The_Battleground?oldid=4934"
Community content is available under CC-BY-SA unless otherwise noted.